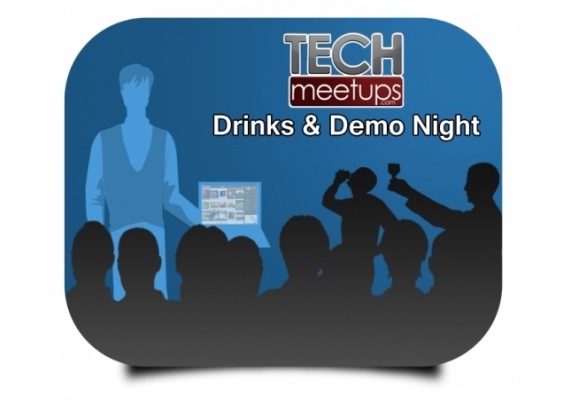 Once again the TechMeetups London Drinks & Demo brought out a great bunch of innovative ideas from our London community.

It was kicked off by Deborah Akinpelu from Pearson presenting Pearson’s Plug & Play API Program.

This was the first time an Enterprise presented their API at our Drinks & Demo night and shows the interest innovative businesses have in working with Startup communities to promote and push out their content to create cool innovative solutions.Deborah presented a couple of Apps built using their API – Maptouria a tour application mashes Eyewitness Travel Guides, Wikipedia & Yelp and Voluntarily a Nursing & Health Survival guide for student nurses available on the App store were both created during Hackathons using the Pearson

API which can be found at http://developer.pearson.api.com

and talked about Software Defined Networks or programmable Networks the idea being that programmable networks gave more power over hard coded networks. Interesting technology that should get some of

the major networking companies like CISCO take notice once the product matures.

Sebastiaan of Signkick is trying to change the way small businesses promote themselves through Billboards by making the process of renting Billboards as easy as buying a book online and amazingly cheap. Two weeks on a London billboard was as low as £300! The solution integrated Google Maps & Street View to take Billboard renting to the next level using the power of the web and mapping. From traditional print ads the next big phase would be digital ads which Signkick is perfectly positioned to tap.

Signkick’s plans are to concentrate on England, grow from their experience and then expand globally.

We then had Raj Agarwal presenting YourArtBay which is a platform to enable group buying & selling Art,  Antiques & Collectibles.

Globally the Art world is a $3 trillion dollar market with $30 Billion transactions between buyers & sellers. YourArtBay aims to democratise & socialise Art investment and ownership due to the current restrictions, monopolies and hierarchical layers controlling the Art world.  It allows small buyers to own art by making

small investments and removes some of the barriers to entry into art ownership.

In true startup fashion Alex Sowter of BlincApp hacked all bugs in the last minute to present BlincApp a cool App where you send a picture to your friend and see their instant reaction as its sent back to you.

The App was originally created by Uni of Kent student Alex & his team at our last Hackathon and allows peer to peer photo sharing that captures instant human level emotion.

Teenage girls love swapping fashion ideas which is quite interesting by Retailers like ASOS. Of course the top question was how do you stop users from misusing it and the simple and honest answer was ‘Why should we ?’

Video reaction was the next phase of evolution for the product and who knows it could become the next human emotion powered instagram. Next month is Ideathon & Hackathon time so we won’t be organising our regular Drinks & Demo night but would encourage our members to come out with your ideas, pitch it to the community, form teams around these ideas and build your products over the weekend.