A job Fair to Remember 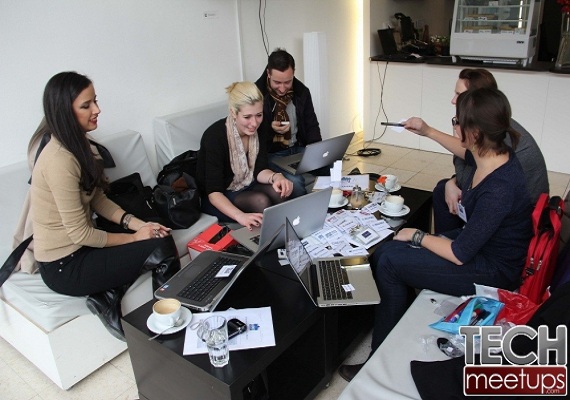 A job Fair to Remember

Early morning flights are always a big hustle. Will I wake up on time? Will I get any sleep? Should I sleep at all? When it’s your first business trip, trust me, the pressure is even higher. But I made it, with 10mins to spare! 10mins that gave me time to reflect on where I was going – TechStartupJobs Fair Berlin – a gathering of employers and jobs seekers, together to find and lead each other into a brighter tomorrow.

After a little more than an hour, snoozing with half-closed eyes  – I was in Berlin.

You might not be the city of love, but for us, the generation of technological startups, you are the city of hopes and dreams.

I had never been to Berlin before. My expectations were a collection of other people’s words and feelings; I had yet to experience the shock on my own.

After missing the one-in-an-hour train from the airport to the city with 3 secs, and almost freezing waiting for the next one, Silvi and I arrived at the hostel. It was neither edgy nor shiny. The reception room looked and smelled like a school canteen from an old Russian movie.  A lovely girl showed us where we would sleep – a room following in fashion the footsteps of the Russian influence.

Being hungry and late, we were quick to leave the place and visit the next-door sandwich shop, for a bite of traditional non-German breakfast of a börek variation. Until this moment I was confused as to where I was. Was I really in the capital of one of the most powerful nations in the world, in the hub of European technological development or in a provincial town in an Eastern European country?

With this pending question in mind, we moved to our second stop. French windows at the front, glass doors, and neon lights inside – this was Supermarkt, the place where the magic happened.

We walked in, people were working on their laptops in every corner, creating something new, something exciting, and in one of those corners there they were – the colleagues we had never met before.

This brave new world of modern companies, where you work with people you don’t meet in real life, puts an extra note of exhilaration on seeing your colleagues for the first time in flesh and blood before you. But yet, you already know each other and you pick up on the conversations of the day before – of seating charts, nametags, and time-flows, and it all comes together the way it was supposed to. Thanks only to the volunteers, a couple of hours later it was all set. They carried tables, documented each and every move, laughed at us for being lost in thoughts and helped everything look exactly the way it was supposed to. It was all done when the clock stroke 5pm – time for the employer to arrive.

So, one by one they started coming with bags full of brochures, banners, pens and badges, phone beanbags and fuzzy little foxes. One even came with a popcorn machine and a little dog, wagging its tail behind. They set up on their stands with colours, smiles, and hopes to find the talent they were looking for.

Once more, all was set when the clock stroke 6pm – time for the job seekers to arrive.

We opened the doors and let the fun begin. Firstly, slowly one-by-one people came in and registered. After a few minutes larger groups began queuing in front of our two registration desks, and suddenly I realized the whole venue is full of people. Alex, our volunteer on the door, switched on his full welcoming character and made even the gloomy ones start their job hunt with a smile.

The room got filled with a buzz of discussion and negotiation.  More and more people came through the doors. It got harder and harder to get from one end of the room to the other, but people didn’t seem to mind when you push them slightly to pass.

And then it was time to present. All the employers were ready. There were slides, videos, job openings and proud talk of expansions. Every one of those employers stood there, speaking with love for their product, knowing they are talking to incredible talent they need to attract.

And the job seekers gathered to listen intensely and choose their targets to conquer.

There were problems, of course. The sound wasn’t working at first, and it took time to find the mechanics, somewhere lost in the sea of people to find the ones they are looking for, but at the end there were hand shakes and laughter.

The sound worked (next time we will know better), people found each other, CVs were given and business cards were exchanged.

My feelings were proud at the end. I hope I am not simply imagining we helped make a couple of lives better. I am confident most of the visitors found what they were looking for, and I am positive that next time, we will do even better.

This gathering of minds helped me see what Berlin was about – not tall flashy buildings, or romantic alleys, but electric energy of working active minds.

So, thank you Berlin for showing me the light. I am proud to have met you and hope you will welcome us again.