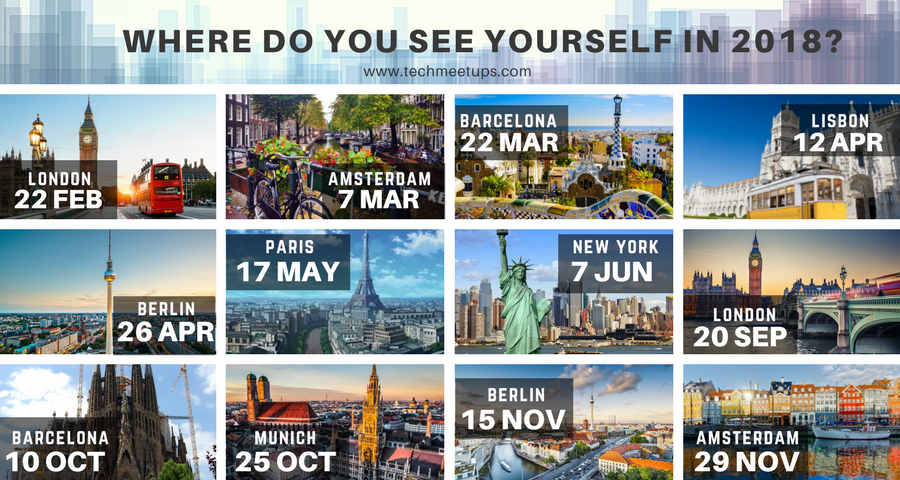 When the clocks announce the coming of a new year what all of us think, is changing something in our lives, doing something new. We all make plans, put aims and try to achieve them in the coming year. Moving to another city is a great start. While you may be excited about living in another city, you should also keep in mind that there are certain things you should think of in advance. One of these things, surely, is finding a job. So here we are to help you in choosing the best city to move and, of course, finding the job you deserve. We have prepared a list of the cities and dates of world’s greatest Tech Job Fair, where you can join us!

London is a crossroad of old and new, offering a great variety of sights and events for culture lovers, exciting spots of rest and amusement and great opportunities for tech talents! With over 40,000 tech companies and an expanding TechCity, London is the dream of any worker in the tech field. Read more here.
TechMeetups is here to help you find your place in this huge tech magnate.

Amsterdam is indeed a tourism and cultural centre but it is hard not to accept that the city has become a leading tech hub. As Ruben Nieuwenhuis, director of StartupAmsterdam said: “When you’re here in Amsterdam at the tech clusters, you see a bit of London, a bit of Silicon Valley and New York.” If you want to live and work in this amazing city, join us at our events:
Job Seeker Night on 6th of March,
Tech Job Fair on 7th of March,
Job Seeker Night on 28th of November
Tech Job Fair on 29th of November

Lisbon has all the needed potential to become Europe’s next tech centre. The country’s government has done everything to make the city attractive for startups and as a result, Lisbon is a leading tech city growing and improving every day. World’s largest Tech Job Fair will be in Lisbon on 12 April. Don’t miss your chance to become a part of our event.

It may sound strange, but Paris challenges other cities as a giant tech hub. The city of love is not only appealing to spend the holidays, it is also an attractive place for tech lovers to work and live. Join us at Tech Job Fair in Paris on 17 May.

New York is another tech centre you would want to move. Here tech is not only in startups and tech companies, it is everywhere! If you, like almost everyone else in the world, have ever dreamed to be a part of the city that never sleeps, then join us on 7 June at Tech Job Fair.

Last but not least on our list is Germany’s third largest city. The city has recently become an interesting spot for tech companies. The city’s startup ecosystem has a lot of opportunities for tech talents around the world. We are heading to Munich on 25 October, join our Tech Job Fair!