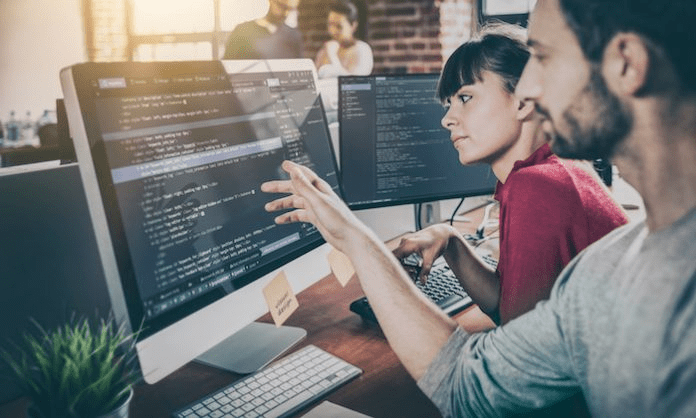 By Owen Hughes a London-based reporter at ZDNet and TechRepublic

Survey of 15,000 developers and HR managers reveals JavaScript, Java and Python as the most sought-after languages, while knowledge of React, Node.js and .NET Core are also in high demand.

JavaScript, Java and Python are among the most sought-after programming languages from hiring managers when recruiting new developers, according to a new survey from programmer training company CodinGame.

The company’s latest annual report, which is based on a survey of 15,000 developers and HR managers from around the world, revealed that six in 10 (60%) of recruiters see a “strong demand” for JavaScript, Java and Python amongst tech companies, with JavaScript the most sought-after language among 62% of respondents.

This was closely followed by Java, which was reported as being in-demand by 59% of recruiters, and Python, which 48% of respondents said was highly sought after.

Some programming languages were found to be popular with developers, but less so with hiring companies.

The same was true for Python: 57% of developers code in the language, but just under half (47%) of companies have high demand for it.

Aude Barral, co-founder of CodinGame, said it was common for programming language trends among developers to be different from trends in the marketplace.

“Some technologies can become trendy within the developer community just because they’re easy to learn, or more convenient, or more aesthetically interesting to use. And trending languages are a never-ending topic for discussion amongst developers,” she told TechRepublic.

“If there’s a match between companies’ needs in the market and trends within the developer community, then languages will grow in popularity. This is the case with Go and Rust, which is used more and more in DevOps. “

Barral added that some programming languages, such as PHP, remained widely used in the market but were otherwise “pretty much disliked” by coders, who considered them limited.

While C remains a popular language for beginners, Barral suggested its popularity had waned recently with the emergence of Python.

“With Python, it’s slightly different, as both developers and companies are fans,” she added.

“It’s the third most in-demand language for companies and developers love it, because it is easy to learn, it’s a general-purpose language, and it’s incredibly efficient to use. And in the past three years, AI and machine learning have widely contributed to the rise of Python.”

CodinGame’s survey also assessed the most popular development frameworks among programmers, with Node.js, React and .NET Core currently out in front.

Leading the pack was JavaScript UI library React: 59% of tech recruiters said they were on the lookout for developers who knew how to build applications in the React framework. Despite this, only 27.6% of developers surveyed by CodinGame said they knew how to build in React – suggesting that job-seekers could make themselves more appealing to recruiters by getting to grips with the platform.