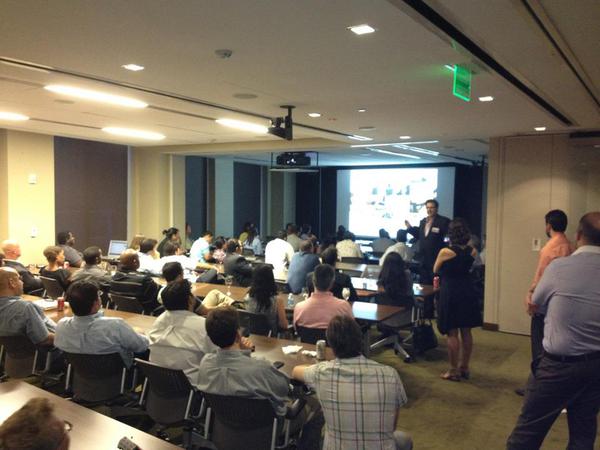 Something is cooking; something is boiling, in the young Miami Startup Tech Sector. So young it has not yet incubated a renowned startup that has gone to achieve wide recognition. Judging by the way things are “accelerating” this might change soon because there is a group of spirits pushing for it like if their lives depended on it. It was palpable Wednesday July 18 in the 14th floor of Brickell 600 (one of the best IT equipped high rises in the country). With at least 80 attendees, the ‘Miami TechMeetup’  organized by Aidana Ramazanova and her team in partnership with StartUp Miami, was a complete success.

HOW HARD IT IS TO RAISE CAPITAL? Mr. James Rohrbach, The Executive Director of Startup Miami, began the night by asking and to answer his own question he quickly introduced ‘Early Shares’ CEO, Maurice Lopes, one of the forces behind the Crowdfunding movement in the country.

Crowdfunding is the process by which a company funds their operations through collective and small participation of willing stock buyers. That’s what Early Shares will begin to do for Startups in May of 2013 when the law Mr. Lopes himself helped pass in the US senate comes into full effect. Crowdfunding, as he explained, is a step forward in collective fund raising. Companies like Kickstarter fund projects as an aggregate of donations in exchange of gifts. With Early Shares you would own stock of the company. In this way, if a start-up gets 5,000 people each buying $100 your company will have $50,000 of funding for its project in exchange of a percentage of the total stock, when profits are collected each buyer gets her share. As Mr. Lopes puts it, it’s like having 5,000 shark tanks betting for your project which gives it an unprecedented amount of validation.

The challenge for the Miami Tech Community lies in finding those startups in embryo stage and helping them succeed. Amazingly the support infrastructure seems to be there. There are a number of initiatives beginning at this moment mirroring mentoring systems that have been applied effectively in other parts of the country which are designed to polish and accelerate an entrepreneur and his idea to a successful launch. The following presenters of the night were 2 young fellas speaking through Skype,  who precisely benefited from this support systems and are advisers for ‘Startup Miami’ and the ‘Accelerator ‘ system, their names are Shawn Kerns, and Patrick Riley. They insisted on the need to concentrate Miami Tech Talent and Leaders in one place to foster complementary abilities and to get a pressure cooker effect, which in Miami is a challenge because of how wide spread people seem to live from each other (as opposed to Boulder, CO. for example).

Well, that’s exactly what ‘Miami TechMeetups’ is doing, or what the good people at Miami Labs are fostering, establishing points of encounter from which the next Startup will emerge. The challenge is to bring people together with high frequency which is already happening. So despite of recessions and setbacks there really seems to be a forward thinking critical mass happening in Miami. Did any one of you went to the last Wynwood Gallery Art Walk (Sat 14th July)? It was packed, and the vibe was surreally positive, Something is definitely going on…..Will it translate to a reality in the Start Up sector? I am optimistic it will….I know it will…Below the blue neon light in the heights of the balcony at 600 Brickell it certainly felt that way.

Do you have a start-up already in the works? Or an idea you believe in?

Following you will find a list of links that can help you accelerate its fruition: