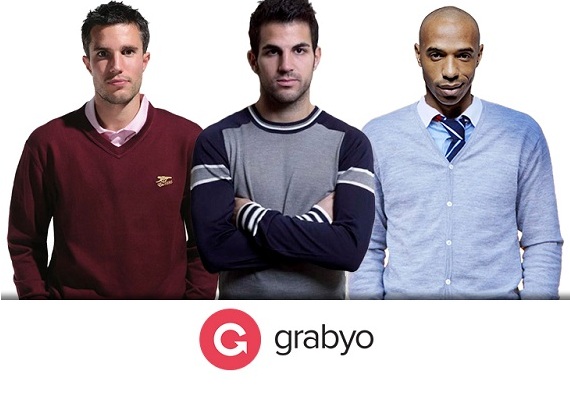 Video-focused startup Grabyo, which has a second-screen offering and partners with TV broadcasters to allow TV viewers to legally share real-time clips of its content, has landed $2m in funding from a clutch of globally recognised sports stars.

UK Premier League Soccer stars Cesc Fabregas and Robin Van Persie, New York Red Bulls star Thierry Henry and current NBA champion Tony Parker are all investing. The funding will be used by Grabyo to expand its presence across Europe and North America. And – as is normally the way with these celebrity investors – what’s known as “global ambassadors. Here’s a video of them promoting it all. Prior to this Grabyo had been bootstrapped.

London-based Grabyo claims it’s seen momentum in social video, and thinks it can parley that into becoming a viable ad platform. It claims its traffic has gone up 500% in the last quarter partly thanks to native video on FB and Twitter. We covered it in depth here when it launched last June.

Gareth Capon, CEO says the the company has worked with over 30 major broadcasters and rights holders this year, including UK broadcasters such as BSkyB, ITV and Channel 5, as well as the FIFA World Cup, Wimbledon, The Ryder Cup, UEFA Champions League and the BRIT Awards. Its also now building partnerships with a number of football clubs in addition to partnering with global brands.

The Grabyo platform brings in real-time TV from partners on the fly. When a viewer wants to share a clip for a show during broadcast (the links to the show are displayed during broadcast) it’s a simple one-click operation for the user. Clips of 20 seconds can then be natively posted to social media sites like Twitter and Facebook. The Grabyo tech can also be embedded within a broadcaster’s apps.

Grabyo is trying to hit three buttons at once. Rights holders need to allow for the sharing of social content because that’s where the audience has gravitated to; brands want to be aligned with this; and both want to engage with consumers at scale.