18 Experts Share Their Secrets to Hiring The Best People

18 Experts Share Their Secrets to Hiring The Best People

Let’s make no mistake about it, the best way to successfully grow a business is to hire the right people.

Over and over again we’ve seen how the most important indicator for a business’s success is not its executives, its products or even its intellectual property, but its employees.

It doesn’t matter what your business does or the industry you’re in — at the end of the day, your employees are the driving force behind everything in your business.

According to Google, a quality hire has the potential to increase productivity and business impact by 300%. Another study by McKinsey found that the productivity gap between high-performers and average performers could be as high as 800% depending on the complexity of the job.

But how do you ensure that you’re only hiring quality talent?

To help you answer that question, I reached out to 18 founders, executives and investors behind some of the fastest-growing companies in the world and asked them to reveal what their hiring process looks like.

I asked them to answer the following questions:

If you want to know how to hire, train and retain top talent, then you’ll definitely want to keep reading…

Ryan Deiss, Founder and CEO of Digital Marketer and Founder of Praxio 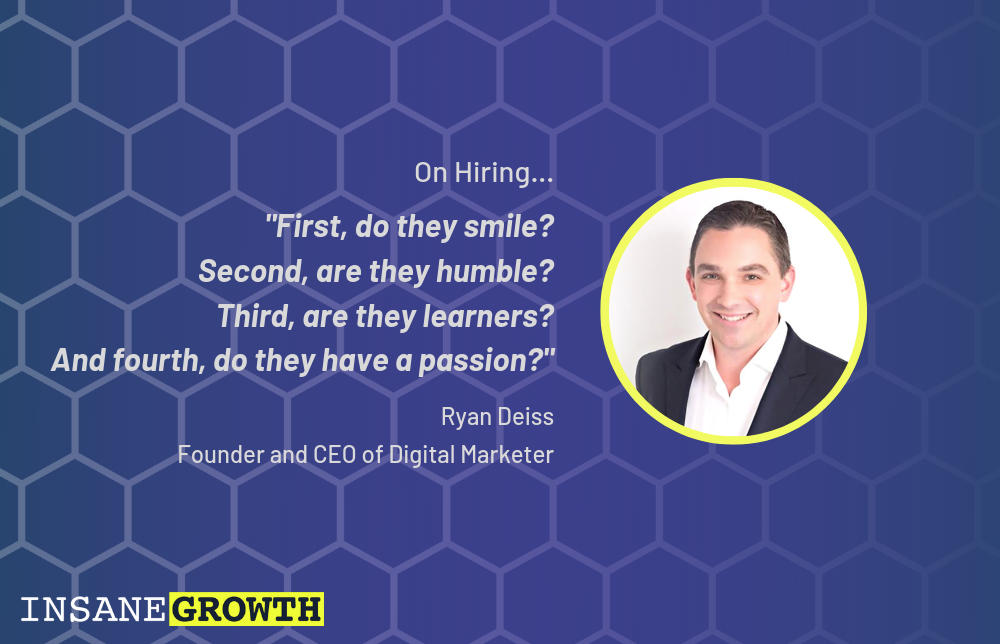 At the most basic level, unless we’re hiring for a truly entry-level role that we plan to train someone to do, we want to see that they have successfully done the job before at a similarly-sized company with comparable resources and support.

We’re a fairly small company, so if someone requires a massive team and hundreds of thousands of dollars in software contracts to do their job, we know it probably isn’t a fit.

But aside from their previous history, there are four other intangibles we try to look for during the hiring and recruiting process, and these four intangibles cut across all departments and all levels, from interns all the way to VPs.

First, do they smile? I get that people are nervous at job interviews, but if someone can’t even fake a smile during the first 10 minutes of an interview, that’s a huge red flag.

Second, are they humble? We ask a lot of scenario-based questions during interviews, many of which require the interviewee to recall times when things didn’t go so well either at work or in their personal lives. During these questions, we want to hear what they learned, and what they would do differently next time. Blaming others and taking zero responsibility (or worse, talking crap about a former boss or co-worker) are huge red flags.

Third, are they learners? At its most basic form, we want to know that they took the time to understand the job we’re hiring for and the work we do as a company. The best candidates are naturally inquisitive and ask sincere questions, as opposed to questions designed to “turn the tables” in an interview.

Fourth, do they have a passion? It doesn’t have to be a passion for this particular role, we just want to see that they’re sincere and that they care about something…anything! Cynical, close-minded people, have a way of infecting everyone around them, so we try to keep these people from ever entering our building.

Training and onboarding teach basic skills and best practices, but it doesn’t become real unless it is also paired with documentation and SOPs that tell new hires how they’re supposed to put their new-found skills into practice.

Similarly, management and accountability are essential for all employees, but if you want someone to grow, they need to also be paired with a mentor who has “been there and done that.”

The only catch is, the mentor can’t also be their manager, or it will put both the employee and the manager in an awkward position. So, if you truly want to develop people, you first need to focus on developing a network of mentors who can support your up-and-comers.

PRO TIP: Find other CEOs and managers who share your passion in people development, and “trade” mentorship across your organizations.